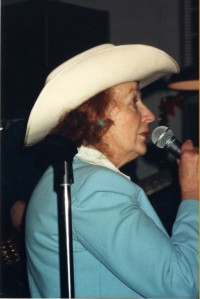 It was either late winter 84 or early 85, when Alpha Barr took over hosting the jams at the Cassidy Inn – she was 54. She continued hosting the jams until Ron Ganderton bought the place and tried to turn it into a blues house. She was 73 or 74 when that happened.

“Mom comes from a musical family that never thought you could ever be too old to learn a new instrument. Everyone in her family was musical in one way or another. Mom told me that she learned to yodel when she was about 10 or 11. She and her neighbour friend, Mary Gomerich, would hurry home after school to listen to a Bellingham radio station that featured a 30 minute country music program at that time.

Backing up a tad… Mom was born in South Wellington on December 9 1929.

The years pass, but Mom can still yodel.” Lavina Galbraith

Many country musicians remember with fondness the Saturday afternoon jams at the Cassidy Inn with Alpha. She made sure every musician was signed up to play, beer tickets were doled out to those who did – and a chance to win $10.00 in the musicians draw didn’t hurt either. I remember a jam or two that ran pretty much straight through from 3:00pm – closing time. Mom (Diane) in the kitchen was sending out food for the band members. 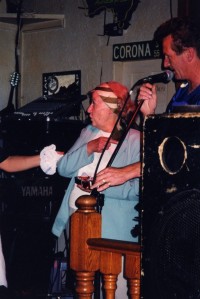 Congratulations, Alpha on reaching 80. I guess the secret is to keep on singing – I’ll give it a try.